A Total Eclipse of the Sun

The "path of totality" for the total eclipse on August 21st passed right over Green Acres (our little spot in the country).  Every motel room in the nearby town was booked more than a year in advance. RV's, campers and tents filled the city parks. The city closed off 2 blocks of downtown and restaurants served lunch at picnic tables during the eclipse.  School was out for the day; churches served food; local businesses ran specials.  It's estimated that 2000 visitors came to town - that's a lot for a town that boasts 4500 permanent residents.  We elected to avoid the "crowds" and host our own Eclipse Party for our employees and their spouses. 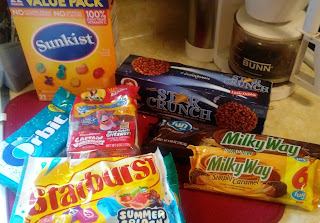 We even had a playlist of sun/moon themed songs, including  "Moon River", "House of the Rising Sun", and "Don't Let the Sun Go Down on Me." 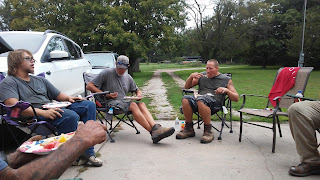 The crew arrived as the eclipse began - about 11:30 - and we lunched in the growing dusk.  And then the big moment arrived - the approximately 2 and a half minutes of totality - during which we saw . . . absolutely nothing.  It had rained off-and-on all morning and the clouds never parted to give us so much as a glimpse of the sun. 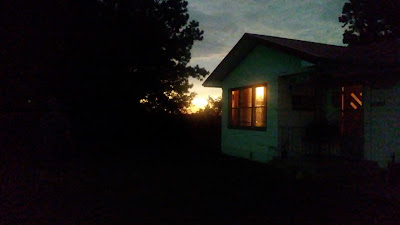 We did get to see the 360-degree sunset that occurs with a total eclipse.  I tried not to waste the experience taking pictures, but I did snap this shot of sunset in the North.

Though the darkness at mid-day was amazing, I am disappointed that I didn't get to see the actual eclipse.  I had never given any thought to seeing an eclipse, but after weeks of preparation and research for one that happened to cross my path, I'm now determined to see one.  So I'm vacation planning for 2024, when a total eclipse will move from southern Texas, up through Maine.  Maybe this will be my chance to finally visit Maine.

Welcome to the new and improved blog.   "Improved" may be a stretch, but there have been some changes.  For starters, there is the new background and header.  I have gotten out of the habit of blogging and thought my renewed enthusiasm to return deserved a new look.

There won't be any huge changes to the content - a little about books, a little about crafts, a little about faith, and a little about life in general.  One addition will be some posts about my journey with diabetes.  I was diagnosed with Type II diabetes on July 5th.  So far it has been a roller coaster of information, glucose testing, diet changes, carb counting, exercise, weight loss, medications and depression.  I think journaling some of my thoughts (believe me, you don't want to hear them all) will help with the depression and anger.  Hopefully, sharing my experiences and lessons will help someone else who is dealing with this ridiculous disease.

A second addition, or rather expansion, will be more posts about faith.  In the past, I tried to avoid including most things faith-based to keep the blog P.C., but I realized that is effectively denying my faith, so there will be posts about things I've learned and messages received, or possibly questions I hope someone else can answer.

Life just keeps rolling along, like it or not, so I'll also be talking about aging, aging parents, owning a business, and hopefully some humor thrown in.

In the mean time, I am preparing for our Eclipse Party tomorrow.  We are in the "path of totality" so will be hosting lunch in our front yard for our construction crew and some friends.  I'll post pictures and details afterward.  If you are traveling to view, or can see the eclipse from your house, I hope you enjoy.

To my returning friends, thanks for not giving up on my blog.  If you are new here, thanks for coming by and I hope you found something you enjoy and that will bring you back.  Please leave me a greeting, including your blog address if you have one, so I can pay a return visit.