Welcome to Just One More Thing...  I hope you are all having a relaxing, entertaining and fun read-a-thon so far.  Thanks for giving up a few minutes of reading to go scavenging with me.

To enter the Book Scavenger Hunt, look at the item list below and find a word, phrase or thought IN THE BOOK YOU ARE CURRENTLY READING that fulfills that item.  For example, if the item were "something soft", your answer could be a word - "kitten"; a phrase - "a satin ribbon the color of Jersey cream"; or a feeling "he leaned to her and kissed her cheek".  Be creative!

Leave a comment that includes your answers and the title of the book you used OR a link to where you posted these items, and your email address or other way I can contact you.

The winner will be randomly selected from all complete entries and will be notified as soon as the challenge closes.  If the winner does not respond within 48 hours, an alternate winner will be selected.  This challenge is open internationally.
Posted by Tami at 2:44 PM 110 comments:

For the "On the Road" challenge hosted by Memory and Cass on Goodreads, I am to imagine I'm on a road trip with a character from the book I'm currently reading and post the perfect road trip song for us to listen to.

I'm currently reading The Burning Room by Michael Connelly.  Since I don't fancy a road trip with Detective Harry Bosch, I'm picking his partner Lucia Soto as my traveling companion.  Lucia (Lucy to her friends) is Latino and speaks fluent Spanish.  The crime they are investigating is the murder of a member of a mariachi band.  Since Lucy is a dedicated detective, I'm sure our road trip is somehow related to the case so we would listen to mariachi music - perhaps even by the band in question.

Since Lucy is considerably younger than I (by about 25 years), she would probably select a more modern take on mariachi - such as this band from the 2013 season of America's Got Talent!

The first mini-challenge of the day, hosted by Audra at Unabridged Chick, is a no-brainer.


Dig through your shelves and share with us a book cover you'd like to escape into! Doesn't matter if the subject, plot, or genre isn't typically your thing; in this case, we're totally judging the book by its cover!

I headed directly for the Christmas section of my book case.  The beautiful images on the covers are usually what suckers me into buying them. 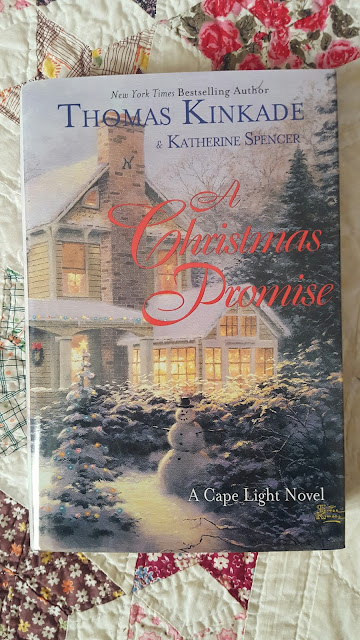 This was the easy winner.  I love the style of the house, the snowy setting, the fact that it's Christmas (hence the lights on the tree and the wreath on the door), that there have been children (or grandchildren) making a snowman in the yard.  Most of all I love the warmth radiating from the house.  Inside is a family sharing gifts, good food, and laughter on Christmas Eve.  Definitely a cover I would like to escape into!
Posted by Tami at 8:36 AM 4 comments:

For the opening post, the lovely ladies behind the scenes at Dewey's 24-hour Read-a-thon are asking the usual questions.

1) What fine part of the world are you reading from today? - The Boonies, otherwise known as southeast Nebraska.
2) Which book in your stack are you most looking forward to? - Since I rarely finish more than one book during a readathon, I didn't really make a stack this time.  But I'm starting off with The Burning Room by Michael Connelly and will alternate that with Where I Am by Billy Graham.  I also have to get in a little Christmas reading, so I have Winter Street
by Elin Hilderbrand waiting in the wings.
3) Which snack are you most looking forward to?  Slightly stale Cheese Puffs (it's a Read-a-thon tradition).
4) Tell us a little something about yourself!  Reader's Digest version:  Wife, Mom, Grandma, co-owner of a grain bin construction business, crazed crafter and lifelong book nut!   (If you want the long version, click the "About Me" tab above)
5) If you participated in the last read-a-thon, what’s one thing you’ll do different today? If this is your first read-a-thon, what are you most looking forward to?  This is my 13th read-a-thon!  ** Caution - blatant self-horn blowing ahead **  If you want to know my read-a-thon philosophy, you can read my Warm-Up Post here.  (What an honor to be posted on the official read-a-thon site!  Thanks, ladies.)    If you don't want to waste your precious reading time on that drivel, here's the RD version again:  "Let it go!" is my theme for the day.  No rules, no expectations, just fun.

But first I have to research:  Do they still print Reader's Digest Condensed Books?   Am I dating myself, and confusing younger readers, by using that reference?
Posted by Tami at 7:15 AM 2 comments:

I finished a quilt!  It's small and it's simple, but it's done!  I made the top four years ago from a package of pre-cut squares purchased at Wal-Mart.  We had just moved, so I was unemployed and was easing myself back into quilting after a five year break. It's a bit too small to be a lap quilt, but looks pretty draped over the back of a chair.   Lesson from this quilt:  look at your fabrics from a distance before you start sewing.  The lines of the lattice pattern on the blue fabric appear even from up close.   But when you step back, one diagonal is definitely dominant and the lines don't all go the same way.  Details, details! 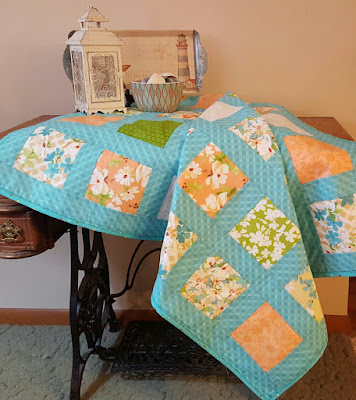 The rest of my sewing time has focused on small projects - some for a craft sale coming up at church, and some just for kicks.  Like this mug rug.  They are hard to see but the quilting lines on the top section are the "steam" rising from the coffee. 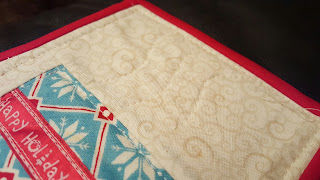 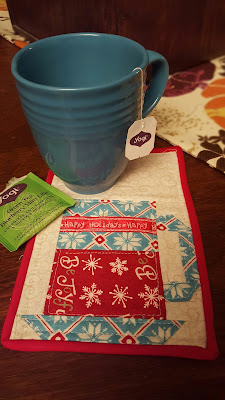 This coloring book and Crayon caddy will be donated to the church craft auction . . . (sorry, I didn't take time to stage pretty pictures.) 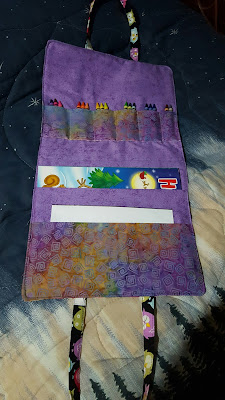 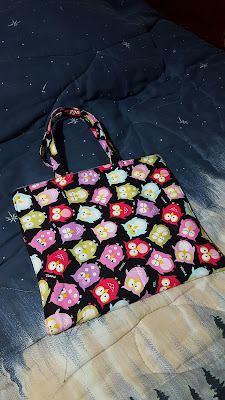 As will this quilted basket - after it's filled with cookies . . . 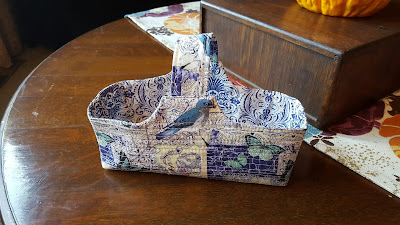 And this set of three potholders that still need the quilting done. 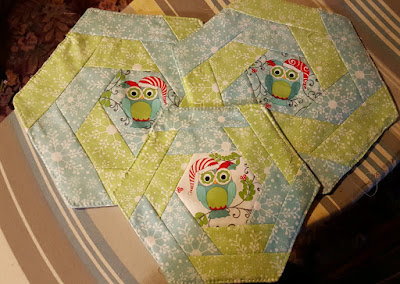 There are a couple table runners in the works but not sure if they'll get done in time.  Why is it that, when I'm sewing items to give way, everything seems to go wrong?  I goofed on quilting the basket, but I think I covered it well.  The potholders were supposed to be a set of four but somehow I cut one owl centerpiece "wonky" but didn't notice until it was assembled and the entire thing was "mega-wonky".   I finally got the corner points on one table runner to align correctly - after several retries and sewing the entire bottom border on upside down once - and realized I had swapped two blocks so they didn't match the top border.  I let it sit for 24 hours while I cooled off, then tore it apart - again - and reassembled it correctly with all points matching.  Now I may not have enough time to get it quilted and bound.  Oh, the joys of sewing! 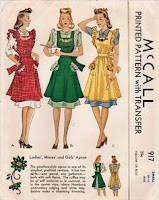 On the back of the door to Grandma's broom closet hung a beige apron -- maybe it had been pink at one time, but it had aged to a soft ecru. It had a bib, like overalls, and a round opening that went over her head, and two ties that met in a bow in the back. When Grandma put on her apron, good things were soon to be -- sugar cookies, cinnamon rolls, cream cake, chicken with homemade noodles, or jars of wild plum jelly and pear honey.

As a young wife, I considered aprons "old fashioned" and wouldn't consider wearing one.  But, with age comes wisdom, and I finally wised up to Grandma's ways and I now have four aprons hanging in my broom closet - two were gifts, one I purchased and one I made myself.  I like them all, but I have never been able to find one - premade or a pattern -that matches the style Grandma wore.

I ran across this reminiscence about "Grandma's Apron" and wanted to share it.  The author is listed as "unknown" but it is based on an original poem by TinaTrivett, which you can find here.

It served as a potholder for removing hot pans from the oven.

It was wonderful for drying children's tears, and on occasion was even used for cleaning out dirty ears.

From the chicken coop, the apron was used for carrying eggs, fussy chicks, and sometimes half-hatched eggs to be finished in the warming oven.

When company came, those aprons were ideal hiding places for shy kids..

And when the weather was cold, Grandma wrapped it around her arms.

Those big old aprons wiped many a perspiring brow, bent over the hot wood stove.

Chips and kindling wood were brought into the kitchen in that apron.

From the garden, it carried all sorts of vegetables. After the peas had been shelled, it carried out the hulls.

In the fall, the apron was used to bring in apples that had fallen from the trees.

When unexpected company drove up the road, it was surprising how much furniture that old apron could dust in a matter of seconds.

When dinner was ready, Grandma walked out onto the porch, waved her apron, and the men folk knew it was time to come in from the fields to dinner.

It will be a long time before someone invents something that will replace that 'old-time apron' that served so many purposes.

Today's moms would go crazy trying to figure out how many germs were on that apron, but I never caught anything from Grandma's apron, but love.
Posted by Tami at 12:01 AM 3 comments: