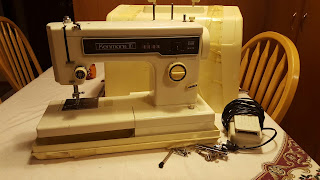 Dave bought me this Kenmore sewing machine in 1981, a year before we were married.  For thirty-four years, it has followed me from house to house, town to town, state to state and back again.  You can see the packing tape on the cover, to ensure heavy-handed movers didn't knock the latches open mid-move.  There were years that it just sat in a closet until someone needed a split seam repaired, but it has gotten it's fair share of use and it's age is showing.  New belts and oil aren't getting rid of the bumps and squeaks any more, and the bobbin winder ceased winding.  The part it needs is no longer available, so I've been getting by with a "Side Winder" - a small machine that does nothing but wind bobbins - and not very well.  The time has come to put the old girl out to pasture.

I read various web-sites that reviewed the best machines for an average seamstress.  I don't need to spend thousands of dollars on a computerized model that knows more than I do.  I don't make the kind of projects that require that.  I just want to do a little quilting, a little crafting, simple clothing construction and repairs.   I settled on this Singer heavy-duty model - deemed "Best In Class" for beginning to moderate sewing. 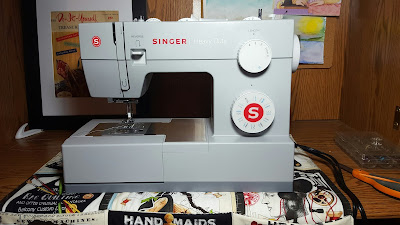 I haven't had a lot of time to play with the new stitches, but it sews smoothly, the tension remains constant and the bobbin doesn't tangle on every-other seam.  Those are all great strides!  This model also adapts for free-motion quilting, which I'm anxious to try on small projects.

My old pal will remain in storage for the time being - in case I need a back up - but I'm enjoying the ease of sewing with my new friend.
Posted by Tami at 1:06 PM 3 comments:

Did you know crafting is biblical?  One of my favorite Bible verses is 1 Thessalonians 4:11 - "Make it your goal to live a quiet life, minding your own business and working with your hands, just as we instructed you before."  Christian comedian Anita Renfroe, posted her personal paraphrase of that verse on Facebook:  "Calm down.  Mind your own business.  Do crafts."  I totally agree!

I have been studying the Proverbs 31 woman in recent months and it occurred to me that this seemingly-unobtainable model of womanhood was slipping in some craft time, cleverly disguised by biblical language.

"She selects wool and flax and works with eager hands."   She goes fabric shopping and can't wait to get to her sewing room.

"In her hand she holds the distaff and grasps the spindle with her fingers."  The spindle and distaff are tools used to spin yarn, and why make yarn except to knit and crochet?

"She makes coverings for her bed."  Quilts, of course!

"She makes linen garments . . . and supplies the merchants with sashes."  She sews clothing and accessories.

"She speaks with wisdom and faithful instruction is on her tongue" - She posts tutorials for her projects to share with fellow crafters.

To Blog or Not to Blog

I seem to have abandoned the blog for the last six months.  I have actually gone for weeks on end without even thinking about it.  So I sat myself down to re-evaluate how I'm spending my days, and do I have the time/desire to continue blogging.

It has been a year of huge changes for us.  Buying a business and "retiring" from my previous job turned life on it's ear.  We have now made it through the first year and the fog is starting to clear.  I can see a general scheme http://auditel.co.uk/that life will now follow.  I won't bore you with all the plans floating around in my head for how I will better manage those responsibilities next year.  The point is that even in the midst of all the new responsibilities, there needs to be some "me time".   However, the variety of "me time" activities has got to be streamlined.  I can't keep up with a dozen different crafts, reading, journaling, Facebook, puzzles, and blogging; but what am I willing to let go?

I am willing to let go of a variety of crafts, focusing on the ones I enjoy most; I'm willing to cut time devoted to several other activities; I'm willing to forgo eating broccoli completely; but I am NOT willing to give up blogs - writing or reading.  Many of you who stop here regularly, and whose blogs I visit in return, have been friends for several years.  Those of you who have just recently begun to stop by - if you haven't given up on my already - are new friends that I want to get to know.  So, blogging is moving back to the top of my to-do list.  I don't guarantee that every post will be riveting, or even interesting, but there will be chatter about crafts, books, family and random happenings, so please come back.  And thanks for sticking with me.
Posted by Tami at 12:15 PM 9 comments: