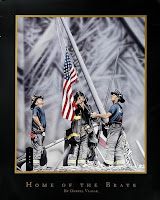 As we've made the rounds through the television channels and blogs today, we've seen a recurring theme that bothers us.  Readers and viewers are encouraged to honor the day without reliving the event.  We should hold feel-good ceremonies talking about moving forward and "world peace" - like a nation of Miss America contestants - but not watch the carnage or mention who caused it.  We should not talk about where we were or how we felt on that day ten years ago.  We disagree.  If we do that, we dishonor those who died that day and the brave soldiers who have - before and since - died fighting for our freedom and security.  We dishonor those who continue to fight that war.
We should relive that day - every minute of the horror that those trapped in the World Trade Center experienced.  Every minute of terror for those on the four planes.  Every minute of grief suffered by their families.  Every act of heroism by every firemen or police officer who sacrificed his life.  We should relive the swell of patriotism and the unity as citizens that we felt in the days following.  We should relive the resurgence of people turning to God, restoring our country's foundation on Him. 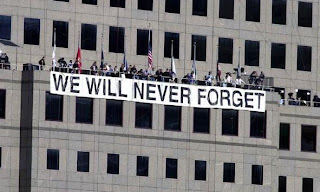 Have we forgotten, how it felt that day
to see our homeland under fire
and her people blown away?
Have you forgotten when those towers fell?
We had neighbors still inside
going through a living hell.
And you say we shouldn't worry about Bin Laden.
Have we forgotten?

Today we give thanks for the soldiers, the firemen, the police officers, the rescue workers and the volunteers who, then and now, run into ground zero when everyone else is running out.  We give thanks for our Nation and pray for her return to "One Nation Under God" and "In God We Trust".