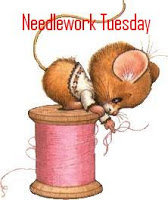 It's time for another installment of Needlework Tuesday, hosted by Heather @ Books and Quilts.  Strike up the band!  I actually finished a project since last Tuesday.

Prayer Quilts:  The prayer quilt I was making is now complete and has been delivered. (For details on what makes a quilt a "prayer" quilt, see this post from last week.)  The quilt top was pieced by the end of the day last Tuesday then I added a backing made from camo and a wildlife print, and added camo binding. It's obviously a guy quilt. 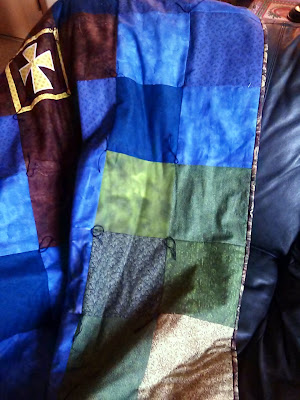 I am now working on a second prayer quilt - and this project was blessed before it started.   The intended recipient of the quilt requested a red, black and white color palette, so I decided to make the cross from a red/black print and the background from various black/white prints.  I only had two black/whites in my small stash, so I mentioned to Dave that I was going to run to town the next day to get some fabric.  The mention of fabric made the little light bulb above his head flick on - "Oh, you got a package in the mail today.  I think it's more fabric from our 'farmgirl thing'."

*Aside to audience:  The "farmgirl thing" would be Mary Jane's Farm's Farmgirl Sisterhood, of which I am a member.  Several sisters sent me packages of fabric bits and pieces in trade for my scraps or just out of generosity.  Or, in the case of one over-stocked sister, to maintain peace in her marriage.  So far, I've received four packages with two more on the way. (See this post.)

When I opened the box I found SIXTEEN black and white prints!  How's that for awesome?  God provided the fabric before I even knew I needed it!  When I finished cutting, there was barely a scrap left big enough to make one more 6" square.  Hopefully this quilt will be finished in time to post pictures next Tuesday.
The Book Quilt:  Regular readers may remember the "book" quilt I'm planning.  It will look something like the picture on the right.  I haven't counted the "books" in the inspiration quilt, but my version requires 396 2 1/2" strips of various lengths.  With all of these remnants I'm receiving, I have decided to use 396 different fabrics. No repeats!  Last night and this morning I went through the latest goodie boxes and cut strips galore.  195 so far!

Table Runners:  Also on today's agenda - the Ten Minute Table Runner.  If you haven't seen this super easy pattern, just Google it.  YouTube is loaded with tutorials.
I learned this method from a friend I sewed with last weekend (see upcoming post) and decided it would be the perfect thing for a gift I need to hurry up and get in the mail.  I bought this adorable Americana fabric and, I'll be darned if there wasn't enough to make one for myself as well!  Funny how these things happen.  Hope to get at least one done today. 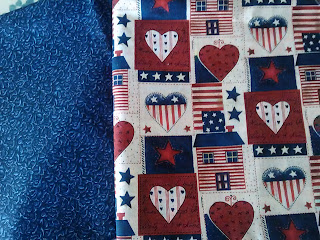 Camping Fabric:  My sister, Teri, gave me these adorable 10" squares of camping-themed novelty fabric and coordinates.  I have 20 of them in red and aqua.  I'm not sure what I'm going to make, but I'm thinking tablecloth.  I guess they'll just sit there until inspiration strikes.  Anyone have pattern or optional project suggestions? 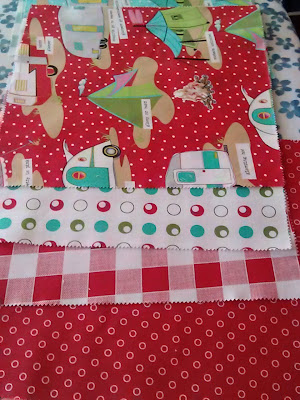 Also in stitching news, I have a "new" addition to my sewing room:  a 1947 Singer sewing machine. 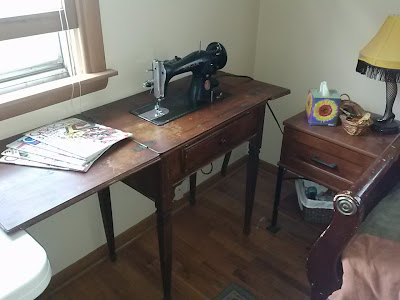 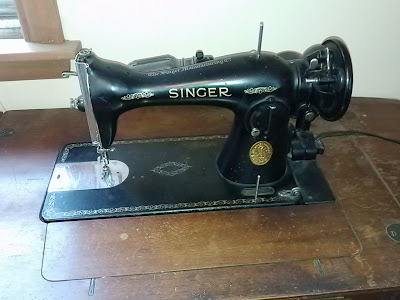 My mom had an early 50's model that was very similar.  She used it for about 50 years, but the motor burned out recently and she had to replace it.  When I was a child, she sewed most of her own clothes plus clothes for three daughters - and their dolls.  That machine stitched many Barbie outfits, curtains, prom dresses, cheerleading outfits, Halloween costumes, bridesmaid dresses . . . all with two stitch options:  forward and backward.

My new machine does run, but I want to give it a thorough cleaning and oiling and possibly replace the power cord.  It's looking a little worn and I don't want to start a fire or shock myself.  The problem is that the sewing portion of the sewing/guest room combo is taking over.  Not that we have guests very often, but when we do, I have to put away the sewing "stuff" to make room for them.  So, project number four for today may be to move the sewing portion to the basement.  There's a lot of space down there, but it's unfinished, so not as pleasant.  I think the advantage of space and the convenience of having the guest room usable would make it worth the loss of sunshine and hardwood floor.

I have today off, then have to work tomorrow and Thursday, so if I'm going to get even a portion of this done, I better get out of this chair.  What are you stitching today?
Posted by Tami at 11:25 AM