The majority of my sewing this week was working on Halloween costumes.  I'll post pictures of them later in the week because they aren't quite complete, but here's a preview:  Some friends of ours are getting married . . . on Halloween . . . in costume.  Dave is performing the ceremony dressed as Alice Cooper.  Stop laughing, your tears are getting in the keyboard!  The bride loves Halloween, so this is her dream wedding.  I have "bedazzled" a tuxedo tailcoat and top hat for Dave.  I couldn't come up with a costume for me, so I decided to do the obvious and be "Mrs. Cooper".  I am making myself a red and black leather tail coat and gold brocade vest.  If they turn out to be wearable, I'll post pictures.  If not, I'll be scrambling for a backup costume.  I'll let you know on Friday.

In the mean time, the only other stitching I've done is to make a Pumpkin Pincushion that I posted about on Sunday.  But in sewing-related news, I have a new sewing machine. Make that a new, OLD sewing machine.  An early 20th century Montgomery Ward treadle machine. 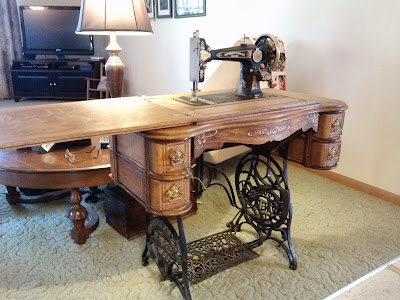 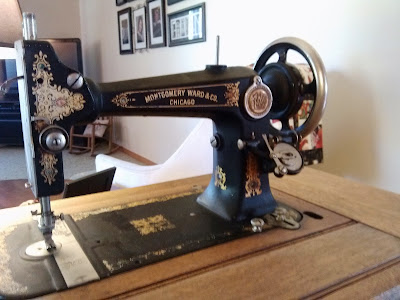 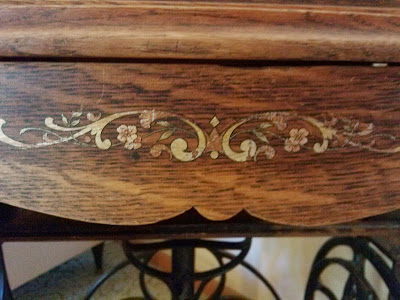 We haven't been able to locate a serial or model number, but the machine was patented in 1886 and the cabinet mechanism in 1903.  I have a 1947 Singer machine and by that time machines had switched to electricity.  My amazing powers of deduction tell me that the treadle machine likely dates between 1903 and 1940.  All parts seem to be in working order, but the belt is missing.  A friend (a librarian, naturally) knew of a site to buy vintage parts, so we may get it functional, but it's really just for decoration.  My friend, Julie, described it as one of those things that just make you squeal when you see it.  *squeal* 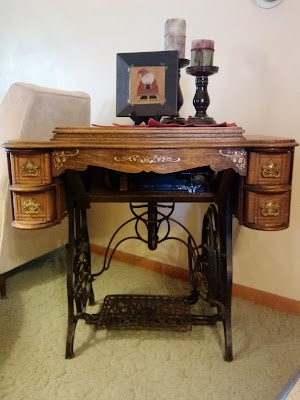